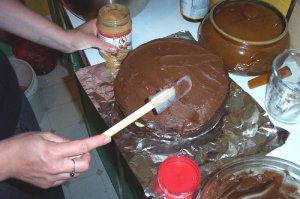 I made my first vegan cake last summer. I was visiting pika, an “ongoing experiment in cooperative living” supported by MIT. That is to say, officially, it is MIT student housing. Friends of mine who lived there were cooking dinner and invited me along. We made a cake, a six minute chocolate vegan cake. The recipe, I think, is from Moosewood. It wasn’t a very fancy cake. It wasn’t hard. It wasn’t advertised as vegan, it simply was a chocolate cake. It just so happened that it didn’t call for eggs or butter or milk. The chocolate was easy to handle, the cocoa powder was vegan, finding that isn’t especially difficult. Six minute chocolate cake is so easy, KM once made it all by himself. He’d never made a cake before.

Sometime after my first vegan cake encounter I landed myself in a Columbia University dorm for a week. Somewhere in there, I learned that the dorm had a functioning kitchen in the basement–an experience nonexistent in my dorm experiences. Obviously, this meant we needed to bake a cake. 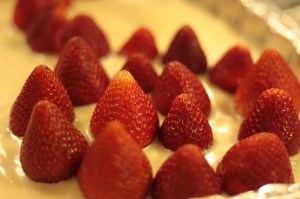 What ensued was some interpersonal angst over what kind of cake we should make–the ingredients necessary for a carrot cake recipe we had were too ridiculous to procure–and help from a local whose parents were kind enough to lend us mixing bowls, spoons, and other kitchen parts, we set down to make a cake. The six minute chocolate cake recipe came out, except this time we didn’t use chocolate. We also didn’t use vinegar.

Six minute chocolate cake works because it has vinegar and baking soda in it. After everything else is mixed together, the vinegar is added and swirled around. The reaction, that same one that I still delight in every time, makes the cake fluffy. Vinegar also helps hold everything together. I don’t know how, but according to the internet, it works. I’ve used it in cookies since reading about that, and it seemed okay. Without vinegar, and with no one looking, I scoured around the kitchen hoping. Instead, I found some lemon juice. I shrugged, poured it in, and hoped for the best. To compensate for this, I poured in an extra half-cup of oil. It allowed me to finish up the container, rather than leaving a stray half-cup of oil floating around Columbia’s campus. It was such a scaled up version of the recipe, I hardly thought it mattered. We (vegan) iced the cake and put some strawberries in a stylized Debian Swirl.

The cake was devoured. The vegans, as they always do, lit up upon being told that the cake was vegan.

The non-vegans didn’t ask, and only afterwards expressed surprise, and sometimes disbelief, that the cake contained no eggs.

To this day, AP claims it’s one of the best cakes he’s ever had. He had had a lot of beer that night, but I am still pleased with this. Whenever I make a cake, he slips in that I should just make one like I did that night in New York.

Iceland brought more adventures in cake baking. I made the first non-vegan cake I’d baked in months. It was CC’s birthday, and MZ, her husband, really wanted her to have a cake. An angel food cake. He and I took turns beating the egg whites stiff. The flour there, a little grainer, a little more flavorful than flour here, made a good basis. The cake had collapsed by the time people ate it, but it still seemed good. The vegans, some six of the group, lamented the loss of a cake eating opportunity, but knew there’d be future cake. Since we had acquired a box egg replacer (which as far as I can tell is potato starch, tapioca starch, and some other things that are preservatives or decaking powders or something), we decided to experiment.

Up until this point, every vegan cake I made was based on the Six Minute Chocolate Cake recipe. It’s a great recipe, but I lamented–and still do–the loss of all the lovely cakes I used to make. Egg replacer claims you can beat it stiff, but until Iceland I had never actually had a box to experiment with. My life has been, generally, devoid of things like sponge cakes and lady fingers, pound cake and macarons. Those little almond squares. Cheesecake. All of those things I used to spend hours trying, and failing, to make perfect, whipping and beating, mixing and stirring, were gone. So, I put the egg replacer to a test.

I made a regular cake recipe, using egg replacer instead of eggs.

Unlike a lot of other amateur vegan bakers I know, I rarely look for vegan recipes. I usually look for recipes I love, recipes I grew up with, and try to change, tweak, them into a vegan equivalent. With this supposedly magical egg replacer–and I was skeptical, I mean, it’s just starch–I could try an older recipe I knew.

Of course, this meant Julia Child.

Recipes I make don’t really all come from Julia Child. Some are family recipes. I first learned to cook using Chocolatier magazine, Captain Cook’s Cook Book (for kids!), a collection of recipes from World War II, and the Fannie Farmer Cook Book. While those books (well, not Chocolatier magazine) set me up for being able to cook meals at home, Julia Child has so far not let me down when it comes to wowing my friends and impressing people with the delicious magical taste of French cooking and lots of fats.

I think I double or tripled the base recipe. I almost never make a basic recipe anymore.

Mix. Bake at baking temperature (350 or “about 175 on the dial”) for 30-40 minutes. The decision to use coconut milk instead of almond or soy milk was based in fats. The original recipe calls for whole milk, specifically whole milk. Soy milk or almond milk didn’t seem quite heavy enough. The cake was crumbly and delicious.

Picture 1, from This Is Chris.Com. Our cake looked something like that. But it was bigger. And not as evenly iced.

Picture 2, Picture 3, Picture 4, and Picture 5, by Asheesh Laroia, and are licensed CC-BY-SA